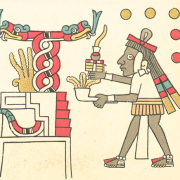 “And the throwing of incense was done in this manner: when any kind of speech was to be made, perhaps a sentence to be passed, they first threw incense in the fire. Before a person spoke, there, in a bowl, was the Kopal. Or when a singer was to sing, when he was about to begin, first he threw the Kopal into a brazier. Then the singer began”

“The wise man is exemplary, he possesses writing; he owns books. He is the tradition, the road; a leader of men, a rower, a companion, a bearer of responsibility, a guide” 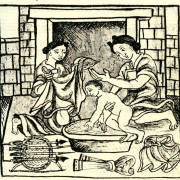 “And when the baby had arrived on earth, then the midwife shouted; she gave war cries, which meant that the little woman had fought a good battle, had become a brave warrior, had taken a captive, had captured a baby”

Today at sunrise began the first day of Tlacaxipehualiztli, the first cempoalilhuitl (month) of the year 9 Calli, with tonalli 9 Ozomahtli. All Calli years are associated with Cihuatlampa.
This image is from the Codex Magliabechiano. It shows Atlcahualo (represented by Tlaloc) followed by the five days of Nemontemi (represented by the five offerings, one for each day, with the last day having a larger offering). Xiuhtecuhtli is shown using his sighting instrument to observe the final sunrise before the knotting of the year to mark it's end. The new year, 9 Calli, begins tomorrow at sunrise.
Firstly, apologies for not posting anything in nearly three years. Secondly, no, today is not the new year. If you've followed this account from its inception, then you know that the year ends the day of the March equinox, with the new year starting at sunrise the next day (which this year is March 21st Gregorian). For more information or a refresher, read through the posts from this account or visit https://chimalli.org/online-class-mexika-calendar-system. You can purchase this year's calendar at that same website or message me if you are in the Los Angeles area.
Today is the 1st of Tlacaxipehualiztli; first day of the year 6 Tochtli. As such, for those who have been following this ig account, we also know that today's tonalli is 6 Cozcacuauhtli.
With today's equinox sunrise, we marked the last day of the year 5 Calli. Tomorrow's sunrise brings with it the start of the year 6 Tochtli.
Don't forget, calendars for the coming year 6 Tochtli will be available for purchase today at this event.
We saw in the two previous posts that the first day of the native year fell on March 12th for the year 1519 and also March 12th in 1521 (both Julian dates). As it turns out, both of these Julian dates are the day after the observable Spring equinox. That means that the day of the Spring equinox marks the last day of the native year.